Today the journal Science published the highest quality genome sequence produced to date for the bread wheat variety Chinese Spring. This was long considered an almost impossible task—the wheat genome is five times larger than the human genome and more complex—but also a critically important one in an era of climate change. Wheat is the world’s most widely cultivated crop, accounting for 20 per cent of all calories consumed throughout the world.

For the past 13 years, more than 200 scientists from 73 research institutions in 20 countries have been endeavouring, through the International Wheat Genome Sequencing Consortium (IWGSC), to complete the genome sequence for bread wheat and make publicly available the new genomic assembly for breeders seeking to develop improved varieties.

“With funding from a range of partners and cutting-edge sequencing technology from our industrial partner NRGene, our research team at the U of S played a key role in the international consortium’s success, a discovery that has the potential for disruptive innovation in wheat improvement,” said Curtis Pozniak, researcher and wheat breeder at the Crop Development Centre in the U of S College of Agriculture and Bioresources. 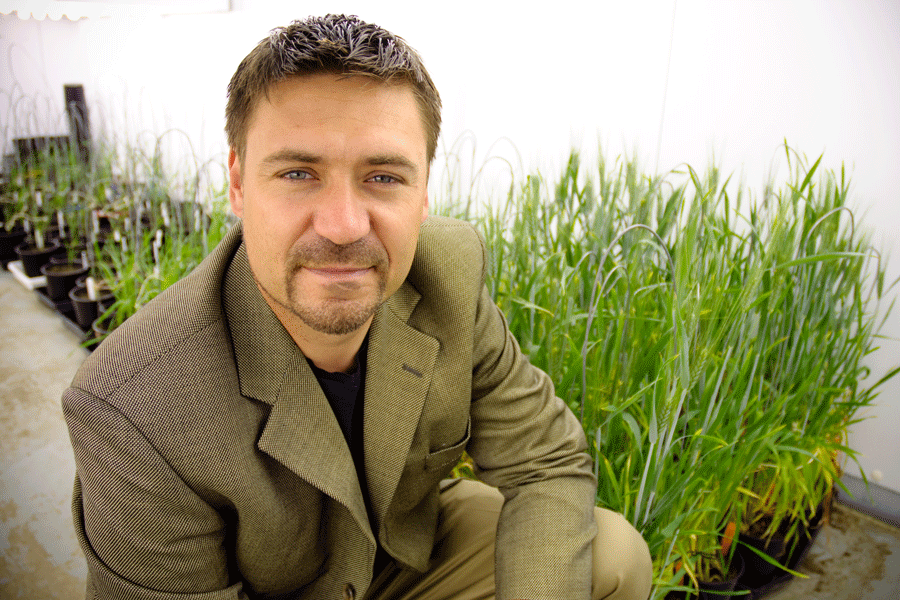 “Essentially we have completed the wheat genome jigsaw puzzle with all the pieces put together in their correct positions and order, providing an enormous advantage for breeders when searching for genes that control important traits in the crop,” said Pozniak. “This breakthrough research will help produce better wheat varieties over the long term.”

Pozniak leads Canada’s contribution to the IWGSC-led wheat genome initiative through the Canadian Triticum Applied Genomics (CTAG2) project, which also includes scientists from the National Research Council, Agriculture and Agri-Food Canada (AAFC), the University of Guelph, and the University of Regina.

“The new genome assembly provides a chromosome-by-chromosome representation rather than the fractured picture available previously and will elevate wheat research and breeding to a level equal to, or even better than, other major crops,” said Andrew Sharpe, director of Genomics and Bioinformatics at the U of S Global Institute for Food Security (GIFS) and co-lead for the CTAG2 project.

AAFC wheat breeder Richard Cuthbert said, “Breeders will now have the information they need to identify economically important traits more rapidly, which will better enable development of wheat varieties with increases in yield, enhanced grain quality, improvements in disease resistance and more resilient to environmental stresses. The result will be more nutritious grain that can be grown more effectively and efficiently in harsher climates.”

- "This breakthrough research will help produce better wheat varieties over the long term."

In Canada, wheat accounts for more than $4.5 billion in annual sales and, when value-added processing is factored in, contributes more than $11 billion each year to the Canadian economy.

With the world’s population expected to reach 9.6 billion by 2050, Maurice Moloney, executive-director of GIFS at the U of S, said this discovery will have a major impact on global food security.

“In light of climate change, water shortages and limitations on the availability of arable land, we will need to rely on plant genetics to increase wheat productivity,” said Moloney. “Solving the massive puzzle of the wheat genome will go a long way towards accomplishing that, similar to the growth that was made in maize and rice crops after their reference sequences were assembled.”

U of S Vice-President Research Karen Chad said agriculture is a signature area of U of S research and the discovery highlights the importance of international research collaboration.

“No single researcher, university or country can solve global challenges like global food security,” she said. “Working together with our international partners, our scientists are now better able to understand the complex set of genetic instructions encoded in wheat DNA, and breeders around the world will soon have the tools they need for crop innovations that will advance global food security.”

The new sequence produced using NRGene’s technology was the backbone of the IWGSC genome assembly. This work was funded by Genome Canada, Genome Prairie, Western Grains Research Foundation, Saskatchewan Ministry of Agriculture via the CTAG2 project, the Saskatchewan Wheat Development Commission, the Alberta Wheat Commission, and the Canada First Research Excellence Fund through the Designing Crops for Global Food Security initiative at the U of S.

A number of international partners also contributed to the effort, including researchers at IPK Gatersleben in Germany, Kansas State University in the U.S., Tel Aviv University in Israel, and Illumina Inc.

“With the support of the University of Saskatchewan and its Global Institute for Food Security, NRGene delivered the assembly of the whole genome from start to finish in just three months, a remarkable computational feat given the complexity of the wheat genome,” said NRGene CEO Gil Ronen.

The Science article is entitled Shifting the limits in wheat research and breeding using a fully annotated reference genome and can be read here.

The U of S-led team also contributed to a second related Science article led by the U.K.-based John Innes Centre and published Aug. 16th entitled The transcriptional landscape of polyploid wheat that describes the repertoire of expressed genes in the new wheat genome sequence and can be read here.

The next step for the U of S team will be to initiate a larger-scale international initiative to sequence the more than 10 cultivated wheat varieties from the main growing areas across the globe. The 10+ Wheat Genomes Project, started last year and led by Pozniak, is using the same NRGene technology to sequence the genomes. Sequencing for several varieties is already complete. More information can be found at: www.10wheatgenomes.com.